Gaetana Jacono of Valle dell’Acate winery and Arianna Occhipinti at the agricultural co-operative named after her are producing marvellous wines from local varieties. Though they use the same grapes their histories and style of wine are widely different.

A visit this week was a revelation about how much their wines have raised the standards from this area. Both are on the region’s wine route, the Strada del Vino, and they (along with COS and Gulfi) represent the must-visit estates of the 20 wineries in this part of Sicily. The other two were not available for visits this past fortnight.

Cerasuolo di Vittoria is the only Sicilian DOCG, the nation’s highest indicator of quality. The region is centred on the small town of Vittoria, about 30km over the Iblei mountains from Ragusa. Ragusa is a picturesque city often used as a film set, and probably best known as one of the locations for the Inspector Montalbano television series.

Ragusa sits at about 500m elevation, while Valle dell’Acate and Occhipinti are in valleys at between 90 and 220m. The former is based outside the tiny village of Acate, while the latter is in the Bombolieri hamlet.

Cerasuolo di Vittoria red is a blend of Frappato (up to 50 per cent permitted) and Nero d’Avola (50 to 70 percent allowed). The latter is the most planted red grape in Sicily and originated around the town of Avola, about 40km from Ragusa. Some versions are 50:50. Frappato provides the lighter notes of rose petals and red berries with Nero d’Avalo contributing darker tones of blackberries and fruit compote.

The result is a wine that smells and tastes of dark cherries (cerasa is the word for cherry in the Sicilian dialect). This DOCG is a truly delicious wine and deserves world attention. In summer’s heat it should be served chilled, the way you would serve a white. 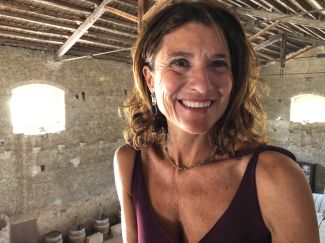 Gaetana is the sixth generation at Valle dell’Acate. The estate’s original winery, known as a “palmento,” was rebuilt in 1917 and is the largest example of this type of building. (It is in the background of the image of Gaetana at left.) A palmento used a millstone to crush grapes. Juice was gravity fed to concrete vats for fermenting and old wooden barrels for maturing.

Arianna started with one hectare of vines in 2004. Since then Azienda Agricola Arianna Occhipinti has evolved into a respected estate, with 28 hectares of vines and another five being planted. They also produce a range of natural products: olive oil, honey, cosmetics made from wine and condiments from fruit grown on the property.

Their production scales are as different as their histories. Valle dell’Acate averages about 400,000 bottles a year, with the potential to increase to 500,000. The estate comprises 100 hectares, 70 of them planted to vines.

Occhipinti averages about 140,000 bottles a year and appears happy to stay at that level for the moment. Almost all the wines sell each year, based on allocation to a range of clients. When I visited in early August two of the estate’s four wines were sold out. Thirty per cent of Occhipinti sells nationally, with the rest going primarily to the US, Norway, Canada and Japan.

Carlo Casavecchia has been winemaker at Valle dell’Acate since 2013. He started his career in Sicily in 1984 as a fresh graduate, remaining there until 1996 before making his name in Piemonte. Gaetana said Casavecchia encouraged her to pick earlier than usual to get more elegant and fresh wines. The results are much more Burgundy than Bordeaux, despite the potential for big tannins and ripeness from the Sicilian summer.

It gets hot in summer. But a wide temperature range as grapes ripen, known as a diurnal, helps produce excellent flavours. Summer maximum temperatures reach about 32C but at night they drop to 20C.

Gaetana describes her Cerasuolo di Vittoria as a “distinguished marriage between the elegant Nero d’Avola and the fragrant Frappato”. She believes it is an excellent match with spicy dishes. Her wines embody what she calls a “modern way of drinking” with fresher, less concentrated wines that should match with food rather than dominate it. Valle dell’Acate offers cooking classes in their beautifully-renovated House of Pairings, or Casa del Gelso. It is available to groups of four to 12 guests.

In January 2013 Gaetana was chosen as brand ambassador for Cerasuolo di Vittoria wines and the Ragusa territory. She travels the world telling people about the quality and values of this territory.

Valle dell’Acate produce a delicious 100 per Il Frappato, plus two momentous wines known as Il Moro and Tane, both from Nero d’Avalo (the latter contains a touch of Syrah). A splendid new addition is the 2013 Iri da Iri, a blend of 70 per cent Nero d’Avalo with the rest Frappato. “Iri” is the local word for rainbow, so think of a rainbow within a rainbow to understand the quality of this wine. It glows with sensuous quality.

In February Valle dell’Acate released four new wines under the Bellifolli line, aimed at the “younger generation”. These are delightfully fresh and aromatic, with distinct labels based on baroque art in Ragusa. The estate became certified organic as of this year. 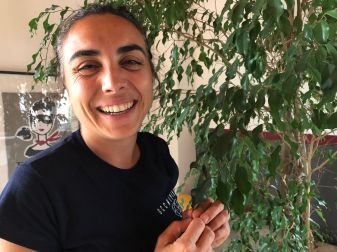 Arianna Occhipinti (shown left) believes in natural wine-making. Grapes are grown organically without chemical intervention. Fermentation occurs spontaneously via only natural yeasts. Minimal sulphur is used to keep the winery clean. “I make natural wines, but more importantly I make territory wines,” she told me, “because when you choose to make wine you must choose the right place.”

Her unique SP68 White is a 40:60 blend of Anbanello and Moscato di Alessandria. The former grape, indigenous to the area, has been effectively reborn at Occhipinti. The latter is also known as Zibibbo. The wine spends 12 to 15 days on the skins. SP68 is the name of the nearby road. This is an IGT wine because Anbanello does not have a designated region, known as a DOC, but it is something special. Italian wine specialist Ian d’Agata described Arianna as “one of the up-and-coming stars” of Italian winemakers.

Flagship Occhipinti wines can be recognised by their wax seals. The 2013 Grotte Alte (translates as high caves) is the current release Cerasuolo di Vittoria and spends 32 months in large Slavonian oak vats. It is a 50:50 blend of the DOCG grapes. Arianna described it as a “Mediterranean wine that preserves the taste of the sea and the Iblei mountains”. It’s a remarkable wine that needs time to open to show its beauty.

Both estates could be the next Italian region discovered by Americans, based on recent newspaper articles. Erica Asimov, wine writer for the New York Times, chose his three favourite Frappato wines in a recent column. They were made by COS, Occhipinti and Valle dell’Acate.

Meanwhile, Italy’s Ministry of Agriculture has asked wine merchants to block sales of Australian wines labelled as Nero d’Avola. The ministry claims that only wines produced from the Sicilia DOC using Nero d’Avola can have the grape’s name on labels, and says Australian wineries are deliberately misleading consumers.

Sicilian wines are becoming increasingly popular in Australia. In Sicily only red wines made using at least 85 per cent Nero d’Avola can be labelled a Sicilia DOC. More about the “debate” between Italy and Australia can be found here.

The glory that is Tokaj

Too hot to appreciate