We return to the excellent Verdicchio grape in Italy’s Marche region, noting its potential for aged greatness. For publication in week starting 29 October 2018.

Dr Ian D’Agata, author of the influential book Native Wine Grapes of Italy, believes Verdicchio has the potential to be Italy’s greatest native white grape. The grape flourishes in the Marche region, on Italy’s east coast, and has become the region’s flagship.

D’Agata said the statement could “come as a surprise to those who have tried only neutral or watery Verdicchio wines, at times even bottled in amphora-shaped bottles”. He was referring to about three decades ago when quality was low in the Marche. 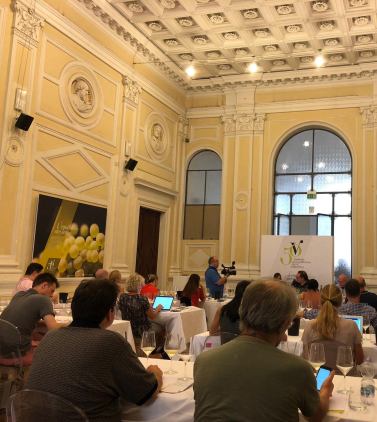 A tasting in the  Palazzo dei Convegni, Jesi

Since then wines have improved considerably. Dr D’Agata believes the only other white varieties in Italy that can match Verdicchio’s versatility and potential for greatness are Veneto’s Garganega (from which a range of Soaves are made) and Fiano from the Campania region.

This week we consider some good to great producers of Verdicchio.

Pievalta near the small town of Jesi is one of the pioneers of bio-dynamic grape growing in the Marche. In 2002 Baron Pizzini recognised the region’s potential for nurturing Verdicchio and purchased almost 30 hectares in two parcels of land opposite each other on the Esino River. Alessandro Fenino joined him as winemaker and, using the baron’s experience in organic farming, started to work bio-dynamically in 2005. Pievalta was the first estate in the Marche region to be certified by Demeter.

A feature of the vineyards is the growing of legumes between rows as cover crops and the use of biodynamic preparations to improve the soil. “We don’t transform the grape into wine,” Alessandro Fenino said, “but leave it to express itself freely” for the benefit of the people who drink the wine.

A feature of the region is the number of medieval villages around Jesi, all 24 of them full of history and beautiful buildings. The Marche is also famous for the artists born there, including Raffaello Sanzios, Donato Bramante and Giacomo Leopardi.

Pievalta gets its name from the small church, or pieve, at the entrance of the main property. Of the almost 30 hectares, 24 on one side of the Esino River are on calcareous soil and are noted for their zesty freshness combined with minerality.

The 2017 Pievalta Verdicchio dei Castelli di Jesi Classico Superiore, labelled as “Pievalta”, is a zingy and delicious wine. The 2015 riserva, labelled as “San Paolo”, is even better with intense floral aromas and flavours.

Verdicchio wines from Pievalta are pressed and then fermented in stainless steel tanks. Ageing also occurs in onex, for a minimum of six months. These whites receive no oak contact, the better to show the grape’s fruit flavours.

Pievalta also makes a charming sparkling wine from Verdicchio called Perlugo. After ageing for half a year in stainless steel, it spends 10 to 20 months on lees to develop complexity. The number of months depends on the quality of the vintage. The wine offers aromas of nuts like almonds plus biscuits and bread.

This column has previously mentioned Colognola, known as Tenuta Musone in the village of Cingoli. The estate is memorable because of the huge bronze sculpture of a stallion by Fernando Botero, the great Columbian sculptor, that greets visitors. The wines are also memorable, which a recent second visit proved.

Colognola has 25 hectares of estate vines, about 85 per cent devoted to Verdicchio. The winery’s interior is organised, precise and clean – which is reflected in the wine. Their flagship Verdicchio is the Castelli di Jesi Riserva DOCG Classico “Labieno”, usually fermented in stainless steel tanks and aged on lees for 24 months in large format old oak barrels known as “botti”.

This wine is picked late, usually near the middle or end of October. Winemaker Gabriele Villani has been creating wine at Colognola since 2002 and is happy to experiment. His 2007 was an homage to a traditional method: After grapes were crushed and the juice put into stainless steel tanks, Villani added about 5 per cent whole bunches of grapes.

The result is wondrous. After a decade it is gold in the glass, glossy with soft acidity and a range of perfumes and flavours like beeswax, acacia and bitter almonds. It should be served only slightly chilled because it feels like a red in terms of structure and texture.

The current release is the 2017 Verdicchio dei Castelli di Jesi Classico Superiore, labelled as “Via Condotto”. It is zesty and fresh with a refined mineral streak that acts as a spine on which to hang beautiful fruit flavours. The current release of Labieno, the 2015, comes from vines that are more than 35 years old, and is shaping to be as beautiful as the older vintages.

Verdicchio ages better than most Italian white wines and previous columns have exulted over the beauty of these aged wines. The problem is, very few estates have large stocks of older wines. The majority of the estates are small-ish and do not have the capacity to store wines for a decade. It does not make sense economically for them to cellar large numbers of bottles. Estates tend to sell all of their wines each year.

This means the only way to taste old wines is to buy them at restaurants or cellar them yourself. The latter is probably the best approach because in the former case you will pay high prices. So do yourself a favour — buy several cases and put them in your cellar for a decade.

Other fine estates worth buying wine from include Vignamato (see left), La Staffa (see an earlier column about them), Marotti Campi, Giusti, Stefano Mancinelli and Bucci. The last is one of the oldest and most impressive producers. Ampello Bucci was an academic before he became a winemaker and has the fatherly demeanour of a senior professor. Like all great winemakers, he makes wine for himself and not the market. “I stick to the one style each year. If you like it, good,” he said with a smile.

Bucci noted that two decades ago when he started, his wines had less than 12 per cent ABV. Now his wines are more than 13 per cent. “This is because of climate change.” Bucci has been smart about museum releases and retains a portion of each vintage. He limits the number of bottles of aged Verdicchio he sells to restaurant to three.

Disclosure: Stephen Quinn was a guest of the Collisioni Wine Project, who provided his travel and accommodation.

Why is camera so expensive?

Nice to win an award